Where to mount a dash cam legally?

The legislation of dash cams in California

The demand for dash cams has experienced rapid growth in the past few years. Dash cam owners use it to document their trips, to monitor their vehicles while they are away, and most importantly to justify themselves in the case of an accident and false accusations. In California, dash cam footage is admissible as evidence in courts. Such evidence can be very helpful when retelling how an accident happened as well as to fight against stop sign violation or running a red light.

Surprisingly, dash cams were illegal in California until  2011 when regulation regarding notifying the use of dash cams to the passengers was established. Just because dash cams are legal doesn’t mean you can just use them however you want. There’s a strict requirement for the places where you may put your dash cam. 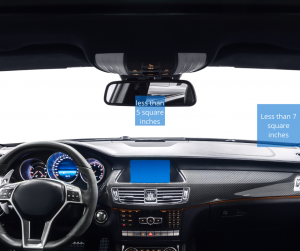 The installation rule is more strict for commercial vehicles: a dash cam in a commercial motor vehicle with the capability of monitoring driver performance to improve driver safety, which may be mounted no more than two inches below the upper edge of the area swept by the windshield wipers, and outside the driver’s sightlines to the road and highway signs and signals.

Digital rearview mirror dash cams as a fairly new product in the dash cam market, there is no law that clarifies its legality, nor there’s any law that bans it.  But in consideration of safety, the digital rearview mirror dash cam has its advantage over other types of dash cams, because it doesn’t take any space on the windshield and thus there’s no way that it will block a driver’s vision while driving.

Last but not least, if your dash cam has an inside camera, please make sure that there is a statement posted in a visible location to notice your passengers that their conversation might be recorded.